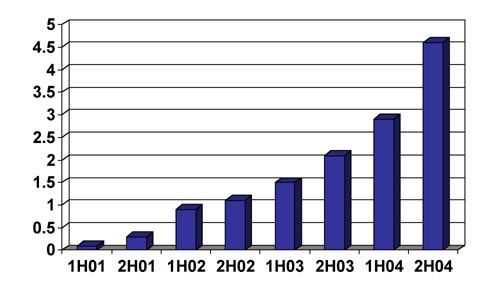 Finally growth in US Text Messaging Services, reported in the Wall Street Journal.

Here’s the CTIA sourced graphic of Billion of US Text Messages per month, presented in the Wall Street Journal article of August 11, 2005 by Li Yuan.

SMS – short message service – has finally exploded onto the US wireless scene. According to the CTIA, the growth in US monthly message traffic has grown to over 4.5 billion messages in December 2004, from a paltry 0.3 billion in December 2002.

Forrester forecasts that US revenues from SMS will grow to $4.3 billion in 2008 fom $2.5 billion in 2004. As great as this growth is, it is still far behind the rest of the world. This is 203 messages per wireless user per year, compared to 651 per user per year in China.

Two years ago the target was youth, but now it’s focused on business people. SMS market development in the USA was backwards. Business people have historically been the early adopters and greatest consumers of  wireless services. But, with SMS that’s backwards in North America.

The article, from August 12, 2005, speculates that this is because of the fundamental pricing practices of US carriers compared to non-US/Canadian carriers. European operators, for example, have been using a per-minutes charge (similar to local measured service), while US/Canadian carriers have been using a bulk minutes threshold plan. These variances have been around from the beginning of the telecom industry as US carriers (and Canadian carriers) created a pricing model with low, flat monthly pricing for consumers and high metered pricing for long distance. Compared to the European approach (also in South America and Asia) of metered pricing all the time and everywhere, these two contrasting models created incentives in different ways.