How Does Broadband For Consumers Affect Business? 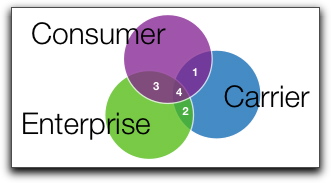 An earlier post described how some 400 million Internet users participate through some high speed service – DSL, cable, LAN or optical. What is the significance of this for businesses and business applications?

As any user of broadband services is keenly aware, broadband is a critical enabler for the next generation Internet. That's great for movie and music downloads. But what does this mean for business?

For business WANs, cost and applications are tightly coupled.

The 'last mile' is frequently the most expensive part of operating a WAN, which of course, must emulate the command and control structure of the business it is designed to support. In 1995, a T1 (1.544 Mbps) cost over $200 and required special equipment to interface into routers costing $4,000+ then available. It was not unheard of for a company to have to pay several thousand dollars to have the T1 installed at the final location. But, because of competition and technology advances (processor prices fell while software functionality greatly improved) $200/month gets you a synchronous 2 Mbps circuit (or more depending on technology choice).

Now, to the applications.

Historically, prior to cira-1995 (the commercialization of the Internet), the innovation framework for communications companies was to develop solutions for the enterprise (or see others developing them and quickly replicate them for your customers), and then as the market for those products took off, repackage them by developing scale so they can be deployed in a shared multi-tenant model for carriers. If the market for independent devices proved valuable, the communications players could deliver them as significant value add for carriers who would market the service to consumers. It worked for contact center ACD although it was never marketed to consumers. It worked for caller ID. It worked for voicemail. It worked for wireless services. It worked for broadband. Enterprises first. Consumers second. Carriers third.

But it's not working anymore. The innovation sequence has changed in the communications market.

Now, it's develop the products for consumer markets by next generation service providers (using the Internet of course), who don't need the massive infrastructure of carriers. Then those products are tuned or emulated or just plain used in the enterprise markets. Nothing for carriers and nothing for the communications-focused companies that normally built products for them. That's why Alcatel-Lucent and Nortel are really hurting. It's a systematic change in the way innovation appears and is evaluated and deployed.