How Green is Your Telecom Company?

British Telecom recently announced a huge step in the environmentally friendly direction and planned to build wind farms that will provide for 25% of the company’s power needs by 2016. [BTW, one of the biggest consumers of giant turbine blades is John Deere, the agricultural and industrial machinery manufacturer.]

The investment of about $500 million will result in a serious reduction of carbon emissions. BT uses 0.7% of all of the power consumed in the UK, so this is a significant amount of energy that promises to become carbon-free.

Some telecommunications companies in the US are also joining in on the green cause with various strategies to reduce energy consumption and carbon emissions.  I did some research to see just how the three largest American companies compare to BT. I looked at the three biggest telecom companies in the US namely Verizon , AT&T , and Qwest to see what steps they taking. I found that although some are taking the initiative and are working on energy-efficiency, the US companies are a long ways away from the leadership position that BT has set for itself and the industry. I compared the companies on the 5 categories below. 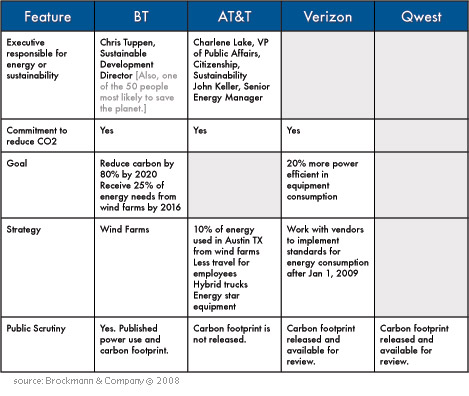 As the table shows, the USA companies pale in comparison to BT. All three of them are silent on at least one important dimension – Leadership, Commitments, Goals, Strategies are all key elements of an organization's seriousness about the issue.

BT takes the green prize when it comes to green telecommunications among these four companies.