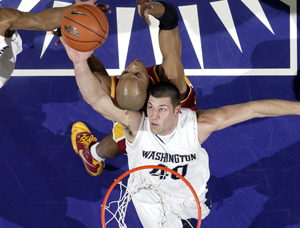 David Brockmann, in 2009 writes “Being a college student, sports are the only thing that are a constant throughout the day that is available at all times.  And with the constant sports all around me at University, I couldn’t help but notice a 6 foot 7 inch Power Forward University of Washington basketball team that happened to share the same last name, and managed to lead UW to the it’s first regular season Pac-10 title in 23 years.”

Jon Brockman, is the all-time leading rebounder for UW and second all-time in scoring, managed Sports Star of the Year by the Seattle Post-Intelligencier while leading UW to a NCAA Tournament birth.

Now following UW’s run in the NCAA tournament with a 2nd round loss to Purdue 76-74, (which severly crippled my NCAA Bracket) the news about Mr. Brockman seemed to have fallen off the map, well alteast in the national media it did.  Then the 2009 NBA draft came along, and with it the massive media attention to NCAA basketball players coming out of college and NCAA players who had graduated to join the NBA.

Of course as a casual NBA fan I completely forgot about the NBA draft and when I woke up the next morning, I noticed the draft grades given by ESPN.com, and noticed that the Sacramento Kings were given a solid “B” grade for their draft, but what startled me was that Jon Brockman had been acquired by them.  Jon was drafted in the 2nd round 38th overall, by the Portland Trailblazers, but then was traded to the Kings.

What does this mean?  Well it means that the name ‘Brockman’ will not be foreign to sports video games, which are a focal point in every guys college life.  So now no longer will my created 5 foot 7 inch point guard for the Boston Celtics be called “Number 7” or “the Point Guard” but may be called “Brockman”.  Above all I would like to wish Jon a sucessful career and hopefully some serious playing time for the Kings.