I’ve been a fan of Sendio email security technology for many years.

The appliance is a rock-solid email processing server that scans all outbound messages for addressees to add to the accept list and scans against nasty viruses we may inadvertently try to bombard the world with. The appliance performs simple processing on inbound emails as well, which can include, if administrator so chooses, scanning for viruses, attachment policy compliance (no .exe please), sender comparison to an accept list, and even send a challenge-response message to the sender confirming that I have not yet received the email and requesting confirmation from the source in order to deliver it. Administrator can turn these features on and off for specific accounts too.

Even before the Sendio ESP accepts the message, it applies ‘graylisting’ where the server determines whether or not the sending IP address has ever communicated with the appliance before. If not, the ESP presents a standard ‘I’m busy, try again’ message in which well-behaved email servers try again in a few moments while spambots move on. 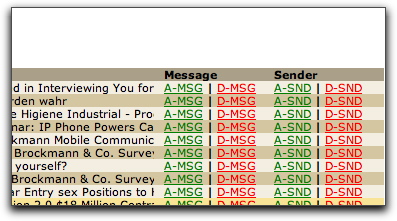 Two weeks ago, we rolled out the latest release of Sendio ESP 5.0 on our server. The upgrade went seamlessly and returned to service without disruption. Significantly, the daily queuing option, allows users to see the messages being held in the queue (received pending confirmation from senders). In the previous release, users were presented with three practical options:

The upgrade introduces two new options for message disposition: drop the message (D-MSG) and drop the sender (D-SND). Now, these options allow users to remove messages from their holding queues for closer inspection or dropping them completely. Dropped senders are simply deleted directly by the ESP and never seen (via email) again.