We've tested other carbon calculators, specifically the AMEE portal which is based on UK assumptions and offers the core data for rent (it has a lengthy licensing agreement too).

I got a promotional email from JetBlue that talked about their Jetting to Green contest and provided the basic attributes of a green campaign :

JetBlue suggested that you use the earthlab.com calculator to determine your own carbon footprint. This one is tuned to Canada and the USA and instead of asking me what appliances I operate (like the AMEE mockup does), this one just asks for my average monthly electrical, oil, gas and propane bills, then asks for my estimated annual mileage on which vehicle(s) and so on. Quick and simple, I was able to get to my carbon footprint. Ready? 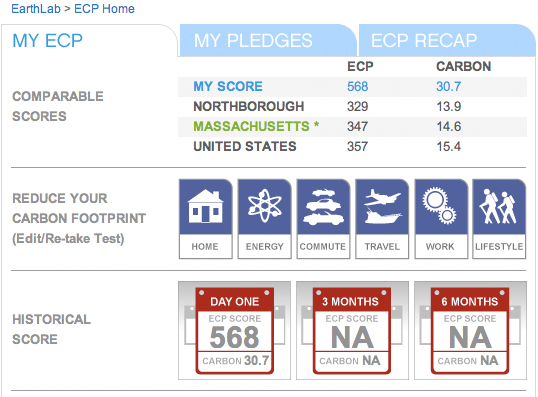 Yikes. My score is 73% higher than my neighbors here in Northborough. Yikes!

I think it's because of my traveling for work. I've included nine business trips in that calculation. My daily commute is only about 20 feet from the front hallway to my office, so that's not it.

We do have several always on electrical systems including our four-seater spa (for those late night relaxation times), eight or nine pieces of equipment – computers, switches, firewall, Wi-Fi access point and the like – so our electrical bill is a little higher than most. Overall, though, the travel adds another 7-10 tons of carbon depending on the duration of flight.