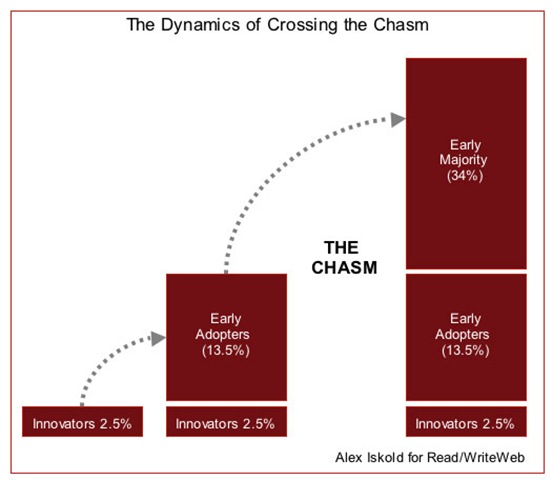 Mobile VoIP is a provocative idea, but competing market dynamics may actually prevent mobile VoIP from getting across Jeffrey Moore’s famous ‘Chasm’. As shown in the graphic from Alex (actually I got it from a former Norteler’s blog – Andy Lark who got this pic from Alex)), the chasm is the gap associated with growing a business and a product/service category through various major market milestones. First sales are to innovators and then to early adopters accounting for 2.5% and 13.5% of the entire market potential respectively.

Well, it seems to me that mobile VoIP may stay a niche application and never reach the ‘early majority’ that are supposed to generate the volume and profits that the mobile VoIP innovators hoped would come their way.

The idea of mobile VoIP was to deploy SIP client software on mobile devices with both cellular and WiFi radios so that they could offer the same features as IP phones and users could avoid calls on their expensive voice-only plans when choosing to place and receive calls over a free WiFi network. In 2004 when these capabilities were first appearing as software product by SIPquest (now CounterPath) and others, it seemed that the market was on the cusp of the rapid adoption of this category and style of voice communications. I remember the statistic that 70% of all mobile calls started in areas covered by WiFi access points such as the home and the office. It seemed logical that people would accept this statistic and recognize it as a chance to improve their cost performance.

However there were several broad problems with mobile VoIP’s enabling technologies:

Voice over WiFi quality problems have the greatest effect on the user experience and are among the most difficult issue to overcome. WiFi was originally designed as a shared network resource among not only the users attached to a given AP, but its status as unlicensed spectrum, meant APs had to get along with and share the available bandwidth with competing networks serving different users in overlapping coverage zones. Jitter and packet loss which are automatically compensated for in computer applications such as email or browsing can be catastrophic in real time voice communications. Users easily get frustrated with the high levels of clipped words and garbled utterances rendering their WiFi communications useless, choosing to call through the mobile network or from a land line phone. To compensate, the 802.11 Committee of the IEEE defined standards for both security, to complicate matters for those intent on eavesdropping and for Quality of Service, so that voice packets could be transmitted at a higher priority than other non-realtime applications.

The propagation of these improvements in quality, privacy and power management through standardization processes and then product integration has been further hampered by natural WiFi network life cycles lasting five or more years at a single purchase cycle. Widespread adoption of these technologies will take the better part of a decade to percolate throughout the economy. As well, mobile devices have to be built that support these features and WiFi network administrators have to be trained on how to configure these features in APs.

The initial releases of Windows Mobile 4 and 5 suggested that Microsoft would be open to enabling mobile VoIP, but actual practice proved to be disappointing. The device manufacturers such as HTC colluded with Microsoft to refuse to couple the WiFi radio to the dual mode device ear piece. They argued that the earpiece was reserved for the cellular radio only. This refusal was the end for the practical use of the device for mobile VoIP since users would not appreciate using only the speaker phone, and the bluetooth/earbud/mic cable was too awkward to be a practical alternative.

Despite all these improvements, the biggest limiter for mobile VoIP was the fact that mobile operators and device manufacturers did not stand still. They continued to improve their networks, introducing higher and higher speed data services and lower and lower priced data plans. 3G networks can support voice and data traffic from the same device simultaneously which enables context-sensitive mid-call services such as transfer, call park and call-me first.

At the same time, new devices and new manufacturers brought innovations that greatly improved the user control experience and made the device category available to many more millions, who look to their big screen, and big processor mobile phone as a personal entertainment device with email, IM, SMS, games, music and even video services. Smartphones are no longer the exclusive purview of business people and the interest in doing VoIP on the WiFi side of the device is purported to be actually quite low because of the low cost, restrictive challenges in executing and the higher complexity of making a call, compared to making a call using the smartphone’s standard mobile operator supported dialer.

Dual mode and WiFi-only mobile VoIP vendors, therefore, should continue to focus on specific campus-oriented industry-specific applications like retail, hospital settings, higher education and contact center environments where certain job classes such as managers, IT support personnel, hospital orderlies, doctors, nurses and professors need to be more reachable and where the WiFi environment can be tightly controlled to overcome the well-known quality and privacy issues. In many of these environments the signal strength of mobile operators is greatly reduced by the building materials and geometry and may not be strong enough to make calls reliably. Therefore, in many of these applications WiFi is the only consistent choice, but it carriers a burden of operations, engineering and network deployment and avoids the mobile operator’s monthly, per minute and per packet charges.