The Wall Street Journal had a fantastically interesting article this morning titled “Where to Shoot in the Shootout” by David Biderman. The article subdivided the goal into six locations, upper-left, lower-left, upper-center, lower-center, upper-right, and lower-right, and took the results since the 1998 World Cup.

What was found by the artitle was that the upper-right corner has the highest success rate, 92%, hence it’s green designation in our little graphic above.  But what was surprising was the rational for the success of that corner. According to the article, the reason for the success is that the penalty takers are more likely to be right handed and there fore right footed making it easier for them to shoot to the top right.  Also the article makes it clear that it is harder for right handed goal keepers to dive to their left, allowing for the top right being so successful.

But in my opinion that doesn’t make very much sense.  Would it not be easier for the penalty takers to follow through correctly with and shoot to the left rather than the right?  Of course the possibilities and head games that go with taking penalty kicks and shoot outs are endless and painful to contemplate. 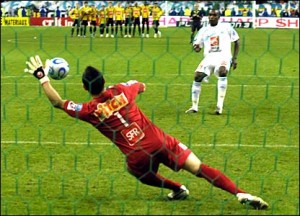 The one subject that the article does not talk about is that the endless talk about how penalty kicks and shoot outs are (according to some broadcasters and journalists), the worst way to end the game.  Since I began to seriously follow soccer in 2006, I have found that the penalty shootout is in fact one of the most exciting and dramatic endings in all of sports! Watching the Uruguay-Ghana game was a clear example, a game which my brother, Dad and I had no intention of cheering for anyone, and following the missed penalty by Ghana at the end of regulation we were glued to the TV. The penalty shootout that followed had all of us holding our breath and basically living and dying with every shot.

Before writing this post, we discussed if anything in North American sports could compare in the drama that goes with the penalty shootout? My dad said maybe the last 3 minutes of an NBA game, I responded, “which takes 3 hours”. We then said maybe NHL sudden death, but after the most recent Stanley Cup final, sometimes only the goal scorer knows that it’s over, just ask Patrick Kane of the Chicago Blackhawks.

Maybe the gold medal game of Canada-USA 2010 with Sidney Crosby’s goal was equally exciting, but the pressure didn’t build like it did in the Uruguay-Ghana game. My Dad likes to bring up the 1972 Canada-USSR [[Summit Series]] winning goal by Paul Henderson in game 8. He was in the seventh grade and the whole school (in Canada) assembled in the library to watch the cliff-hanging game on TV. He says that was riveting TV for sure! and it changed Paul Henderson’s life. He became a Christian minister and gave talks all over Canada and around the world about what that goal meant to him, Canadians and the free world (that the Soviets and socialism could be beat).

Needless to say the only thing that sort of compared was the 2 minute drill in football, but still we agreed that the penalty kick shootout is by far the most dramatic and greatest way to end a sporting event, we are guaranteed a villan and a hero, a winning team and a losing team – something that soccer doesn’t naturally produce after 120 minutes of play.